”The most beautiful thing we can experience is the mysterious. It is the source of all true art and science.” Einstein

The heading, lede and first two paragraphs of this essay translated from Finnish into English by Peter Culley of Cool Marketing, all the rest by the writer Taija Mård herself.

Close to Helsinki Cathedral basting in the February snowscape sunshine is one of the oldest buildings in Helsinki, Kluuvikatu 5, designed by architect Theodor Höijer. The building is home to the cosy Library Bar of the Belge restaurant with the perfect dim-lit atmosphere for retreating to discuss Gilead, an epistolary novel written by many-times prized author and professor of creative writing Marilynne Robinson.

The book tells of an elderly Congregationalist pastor living in the town of Gilead, Iowa in 1956 who wrote accounts of his life memories for his young son. As the pastor knew he was dying, his wish was to leave a literary legacy for his son, who he not only loved dearly, but also revered and respected. ”I would point out again that it is the consistent example of parents in the Bible that they honor their children.” Being a pious gentleman devoted to providing solace and salvation for others he had no desire for worldly possessions, but more for amassing immortal treasures in heaven. Indeed, this makes his heritage exceptionally ponderous.

Pastor John had lived a tough life, but was well read and highly educated. The writings describe his physical, mental and spiritual journey with a relentless focus on sincerity and reality. It is the relaxed tone and contemplating grasp of these accounts that give the novel its meditative qualities. By intrinsic undertakings the novel is broad and deep, yet narrow and restrained with regard to external events. Nevertheless, the story is enthralling and contains numerous vivid turns of events and varying heights of suspense. For instance the heathen Jack, John’s nemesis and son of old Boughton, John’s best friend and colleague, is involved in the plot.

In addition to Jack’s hovering as a potential future threat over the reverend’s family members, another support beam of the plot structure is the life of four generations of Ames men and through that some of the most wounding events in their country’s history – both world wars, the Civil War, Spanish Influenza, slavery, racial discrimination. The big world penetrates the small town; Gilead definitely isn’t sleeping in any kind of isolation.

The author zooms into the microcosm of a small town in order to reach to what is universal and all the way to the macrocosm of the heavenly kingdom. Reverend Ames often compares various incidents and characters in Gilead to those in the Bible and talks about his flock empathically, about his own endeavours modestly. Grace is forever present in his heart, and even in the most mundane acts he’s able to recognise a sacrament.

The focal point, almost like a warming open fire around which to gather, is John’s sermons, written over a period of forty-five years and now packed in old boxes and stored in the attic. His life’s work is quite extensive to say the least: 67 500 pages, 225 average-length books – the same amount as Augustine and Calvin wrote. In them he has pondered not only the Bible’s most profound ethical dilemmas, like the existence of good and evil and the Ten Commandments, but also God’s essence and the very nature of faith itself.

The novel’s central motive is of course theology. This core of John’s life is touchingly crystallized in Dr. Elaine N. Aron’s book The Highly Sensitive Person: “Spiritual approaches include all the things people do to explore the nonmaterial aspect of themselves and their world. Spiritual approaches comfort us, telling us there really is more to life than what we see. They heal or make more bearable the wounds received in this world. They tell us we are not trapped in this situation, that there is more. Maybe there is even some order or plan behind all, a purpose.” However, in his letters to his son John is neither dogmatic about dogmas nor preaching as a preacher. He refrains from foisting all sorts of truths onto others to the extent that finally decides to have all his sermons burned! Instead he has questions which he often leaves unanswered. He is very fond of Karl Barth, the famous Swiss Protestant theologian, who spent his life setting question marks against all manner of "truths" and said, "Faith is awe in the presence of the divine incognito; it is the love of God that is aware of the qualitative difference between God and man and God and the world."

And so the world begins to shine the brightest; such is its exquisiteness and so exquisitely John describes it. ”Wherever you turn your eyes the world can shine like transfiguration. You don’t have to bring a thing to it except a little willingness to see.” Oh, how he has loved his earthly journey, this fantastic temporary state of existence. And thus emerges a motive even bigger than theology – the praise of life.

”There are a thousand thousand reasons to live this life, every one of them sufficient.” John is in no need of nowadays so essential faraway trips, peak experiences, quality time. Small things, which are “ordinary in kind but exceptional in degree”, become highlighted. His everyday life is full of blessings, funny things, and quiet humour; he notes the pet cat’s little stunts with a twinkle in his eye; and when the mood strikes, can even start waltzing! Small wonder that his favourite philosopher is Feuerbach, who although a famous atheist recognised the joyful aspects of religion and loved the world.

John’s favourite word to describe what he observes around him is “remarkable”! Literature and especially poetry enrich his evolutionary and visionary soul. He experiences peace at home with his loved ones and in the silent church alone, immersed in prayer.

Because of a past tragedy, the birth of his son and the role as a father are an exceptionally great fulfilment to him. “But oh, what a splendid thing it has been that you came finally and what a blessing to enjoy you now for almost seven years.”

John is not only very intelligent, but also highly sensitive, and that’s why he is so humbly inspired by nature, experiencing it with every cell in his body. “I remember a slice of moon, no more than that. It was a very clear night, or morning, very still, and then there was such an energy in the things transpiring among those trees, like a storm, like travail. I stood there a little out of range, and I thought, It is all still new to me. I have lived my life on the prairie, and a line of oak trees can still astonish me.“ All his perceptions are so subtle that even the most delicate hues are detected – like how the trees sound and smell.

Of all the elements displayed in the letters, especially water in all its beauty is presented very movingly and symbolically. Light, however, is the key image and metaphor. In fact the whole book could be envisioned as encircled by a halo! John reminisces about “those first experiments with fundamental things, gravity and light, and what an absolute pleasure they were” and constantly describes different types of light (even though he reminds us that no one can do it proper justice): The light in the world, the light hereafter. Moonshine, candle flame, the glow of fireflies… And the brilliance of sunshine in these types of reflections: ”There is a shimmer on a child’s hair, in the sunlight. There are rainbow colors in it, tiny, soft beams of just the same colors you can see in the dew sometimes. They’re in the petals of flowers, and they’re on a child’s skin.”

Even his dark time John doesn’t consider totally gloomy: “When I speak of the long night that preceded these days of my happiness, I do not remember grief and loneliness so much as I do peace and comfort – grief, but never without comfort; loneliness, but never without peace.” He finds meaning to our troubles in the idea that God tries to make us understand something through them. John reminds us, however: ”To value suffering in itself can be dangerous and strange, so I want to be very clear about this. It means simply that God takes the side of the sufferers against those who afflict them.” Light will always be more powerful than the powers of darkness.

The light which superseded John’s dark time was his wife Lila. The love he feels for her is comparable to the greatest love of all: ”I might seem to be comparing something great and holy with a minor and ordinary thing, that is, love of God with mortal love. But I just don‘t see them as separate things at all. . . . I remember in those days loving God for the existence of love.”

A life lived like this is marked by gratitude, and so is the reading experience.

And the glow won’t fade even when the flame of life is extinguished: ”In eternity this world will be Troy, I believe, and all that has passed here will be the epic of the universe, the ballad they sing in the streets. Because I don’t imagine any reality putting this one in the shade entirely, and I think piety forbids me to try.”

Slow food: Good food was one of life’s great little pleasures for John Ames. Although during his lonesome years he was just getting by on those fried-egg sandwiches, the women of the church brought him all sorts of casseroles. To us, moussaka, popular in Greece and the Middle East, important areas in the geography of Christianity, represents the genre’s utmost elite. 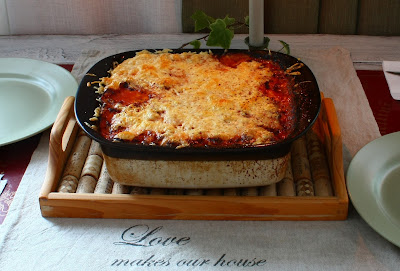